On 14 – 16th May 2011 I held a spring photographic workshop entitled “The Four Corners Adventure” in the US; based at Abajo Haven Guest Cabins, a small private ranch close to the town of Blanding, UT.

The town, which claims to be a ‘Base Camp to Adventure’ is well suited to our photographic workshops as the location is central to many of the National Parks, State Parks and Native American Reservations of the Dine (Navajo), Hopi and Ute Tribes. It is also very close to other ancient Puebloan sites which are only accessible with local knowledge. 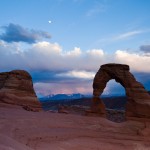 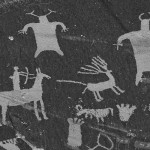 Day-1 started with a short visit to Newspaper Rock to photograph the impressive petroglyphs in the morning light which is ideal. After Newspaper Rock, we went on to Arches National Park where we visited several of the lessor known arches saving the icon of Utah, Delicate Arch for the prime ‘Golden Hour’. Delicate Arch is perhaps the most famous Arch in the world and I had hopes for a beautiful sunset even though the weather was not looking too promising.

We took a mid-afternoon break in Moab for a bite to eat and a cool beer during which I took the opportunity to present the first lecture on ‘Camera Techniques & Settings’. Getting to the Arch requires a 2-mile hike from the car park which takes about an hour and is reasonably exhausting when considering tripods and camera equipment also have to be hauled up the mountain. The effort is well worth it with amazing views of Delicate Arch and the surrounding Jurassic landscape. The weather was not ideal with some cloud cover and we didn’t get the rich red sunset that we had hoped for, but none-the-less the experience was rewarding. The banter from the other photographers present was hilarious; then as the moment approached a cool calm seemed to descend and all could marvel at this magnificent scene and one fellow whispered breathlessly “this is photography … all set up … waiting on the light.” 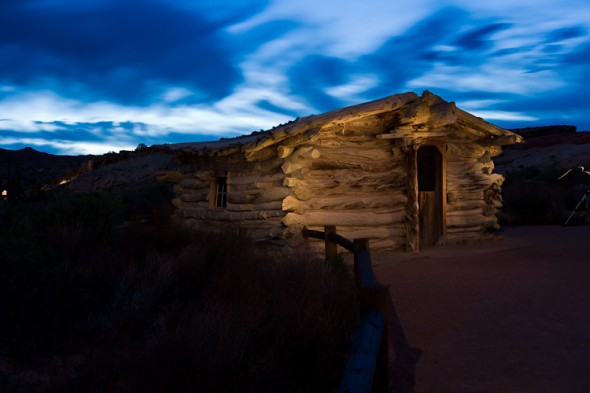 On the walk back to the car in the moonlight, I decided to do something a little different with the historical Wolfe Ranch – a small one-room cabin built in the late 19th century. While using a tripod, I asked the team to manually set focus and exposure with a shutter speed of 30 seconds and used a torch (flash-light) to illuminate the scene. The technique is to paint the subject with light while the shutter is open; the trick is to shield the torch with your body during the process so the light doesn’t shine directly into the lens. This technique is not new and is used in indoor architecture usually with studio lights or electronic flash units. 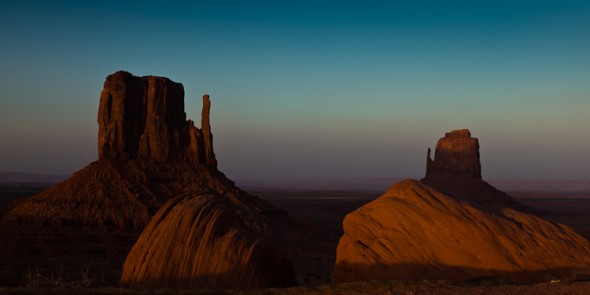 Day-2 was equally busy taking in Tapestry Rock (a location valued by the Navajo and where the patterns of the rock strata are used extensively in their weaving), Muley Point (with extensive views over Goosenecks and Monument Valley), Moki Dugway, Valley of the Gods then on to the iconic Monument Valley on the Navajo Reservation for another sunset. Just before crossing over the San Juan river onto the ‘Res’ we stopped for lunch where I presented the second lecture, this time targeting composition and entitled ‘The Photographer’s Eye’. Lunch included a refreshing beer to clear the red dust from our throats and beef stew and fry bread that are a traditional Navajo meal. The weather in Monument Valley was not too kind to us this visit as it was extremely windy and hence dusty; this is particularly a problem with cameras and lenses, it is not advisable to change lenses under these conditions, in fact, the dust can be very fine and can easily contaminate moving parts. 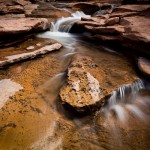 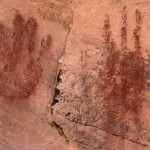 On Day-3 we drove west from Blanding on dirt roads first to a cottonwood creek next to an ancient Great House to paddle in the cool water with our tripods. Armed with polarizing filter and ND grads we could slow the shutter speed to show movement in the water. Next stop was the stone picnic table on top Comb Ridge, an impressive geological sandstone uplift some 80 miles long and 1000ft high providing amazing views, all that seemed to be missing were the dinosaurs grazing in the valley below. After photographing a flowering yucca and other desert flowers we proceeded to a hidden canyon which contains ancient Native 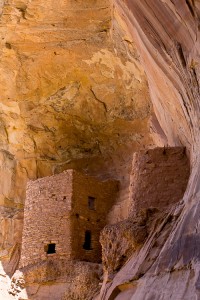 American ruins dating from the Pueblo I era (750-900AD); these ruins were inhabited at different times during recent history. The Puebloans first extended the cave floor outwards in order to provide a wider foundation to build upon; the main high-status tower comprises two floors, the higher one being a later build, namely the Pueblo III era (1150-1350AD) where working of the stones is more precise. Also visible are various petroglyphs, pictograms and hand prints and the internal walls clearly show that this civilisation painted them with bright colours and with pictures of animals. 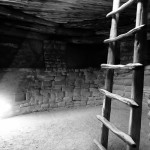 This historical site also includes a single Kiva; a ceremonial underground chamber accessed via a ladder in the roof and key to the Ancients beliefs being a womb of culture and vision; a safe place where the past meets the future. A single Kiva on this site tends to suggest a population of around 15-20; the Kiva ladder image was taken at Mesa Verde during a visit in 2010. 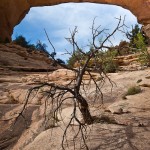 After climbing out of the canyon and returning to the car, the next stop of the day was Natural Bridges National Park where we hiked down another canyon from the mesa plateau to see Owachomo (a Hopi name) bridge carved by flowing water from white Permian sandstone.

We returned to base camp at around 7pm for a hard-earned rest and a dinner together and were joined by our kind and wonderful hosts Bill and Lesley Haven and other guests where I presented a slide-show of some of the images that we had taken. I’d like to extend a huge thank you to all those who were involved in the organisation and attendance of this workshop. To keep informed of future workshops both in the UK and the US, please e-mail me or subscribe to the RSS feed.