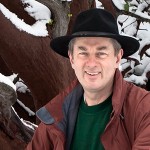 I am a semi-professional photographer based in Cambridge, UK and specialising in travel, landscape and commercial photography with a strong bias towards Visual Art.  I am a Licentiate of the Royal Photographic Society and member of the Digital Imaging and Contemporary Special Interest Groups and on the comittee for the Digital Imaging Group Eastern Centre.

My first photograph was an abstract of an electricity tower taken in 1970 on a 35mm film camera, later upgrading to a Russian Zenit and then onto various Canon SLRs.  Searching for ultimate quality of images, I moved into medium-format with a 6x6cm Bronica where I found the square format interesting.

Once digital sensor technology had progressed sufficiently (in 2003) I bought my first digital camera, a Canon EOS 10D and now shoot with a 5D Mk3.  More recently, I wanted to take my photography further and so I am also shooting large-format and developing 4×5 (inches) sheet film.

“Once, my camera went with me as I travelled… Now it takes me places.”

The Lure of the Dark Slide

Why go back to film? It’s the only (affordable) route if you want Large Format, so why Large Format? Several reasons:

3 Comments on About Les Smith – LRPS